This is a guest post by Dan McGlinn, a weecology postdoc (@DanMcGlinn on Twitter). It is a Research Summary of: McGlinn, D.J., X. Xiao, and E.P. White. 2013. An empirical evaluation of four variants of a universal species–area relationship. PeerJ 1:e212 http://dx.doi.org/10.7717/peerj.212. These posts are intended to help communicate our research to folks who might not have the time, energy, expertise, or inclination to read the full paper, but who are interested in a <1000 general language summary.

It is well established in ecology that if the area of a sample is increased you will in general see an increase in the number species observed.  There are a lot of different reasons why larger areas harbor more species: larger areas contain more individuals, habitats, and environmental variation, and they are likely to cross more barriers to dispersal – all things that promote more species to be able to exist together in an area. We typically observe relatively smooth and simple looking increases in species number with area. This observation has mystified ecologists: How can a pattern that should be influenced by many different and biologically idiosyncratic processes appear so similar across scales, taxonomic groups, and ecological systems?

Recently a theory was proposed (Harte et al. 2008, Harte et al. 2009) which suggests that detailed knowledge of the complex processes that influence the increase in species number may not be necessary to accurately predict the pattern. The theory proposes that ecological systems tend to simply be in their most likely configuration. Specifically, the theory suggests that if we have information on the total number of species and individuals in an area then we can predict the number of species in smaller portions of that area.

Published work on this new theory suggests that it has potential for accurately predicting how species number changes with area; however, it has not been appreciated that there are actually four different ways that the theory can be operationalized to make a prediction.  We were interested to learn

To answer these questions we needed data. We searched online and made requests to our colleagues for datasets that documented the spatial configuration of ecological communities.  We were able to pull together a collection of 16 plant community datasets. The communities spanned a wide range of systems including hyper-diverse, old-growth tropical forests, a disturbance prone tropical forest, temperate oak-hickory and pine forests, a Mediterranean mixed-evergreen forest, a low diversity oak woodland, and a serpentine grassland. 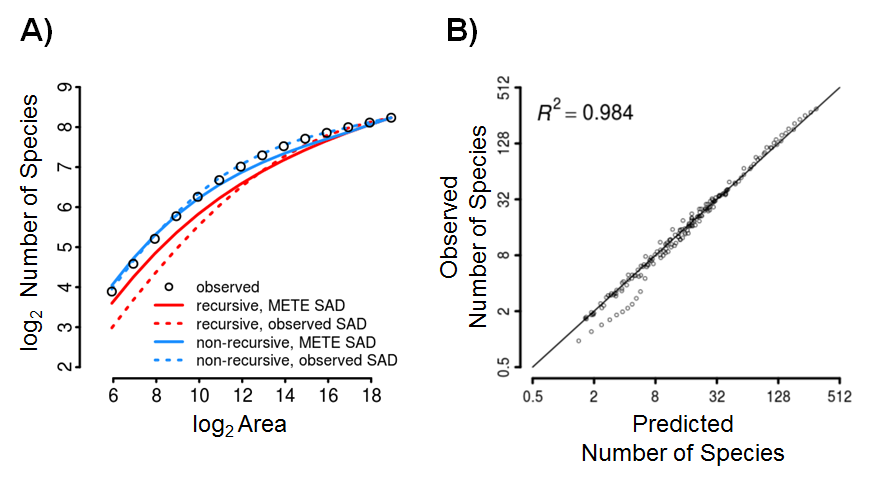 Across the different communities we found that the theory was generally quite accurate at predicting the number of species (Fig 1 above), and that one of the versions of the theory was typically better than the others in terms of the accuracy of its predictions and the quantity of information it required to make predictions. There were a couple of noteworthy exceptions in our results. The low diversity oak woodland and the serpentine grassland both displayed unusual patterns of change in richness. The species in the serpentine grassland were more spatially clustered than was typically observed in the other communities and thus better described by the versions of the theory that predicted stronger clustering. Abundance in the oak woodland was primarily distributed across two species whereas the other 5 species where only observed once or twice. This unusual pattern of abundance resulted in a rather unique S-shaped relationship between the number of species and area and required inputting the observed species abundances to accurately model the pattern.

The two key findings from our study were

Of course there are still a lot of interesting questions to address.  One question we are interested in is whether or not we can predict the inputs of the theory (total number of species and individuals for a community) using a statistical model and then plug those predictions into the theory to generate accurate fine-scaled predictions.  This kind of application would be important for conservation applications because it would allow scientists to estimate the spatial pattern of rarity and diversity in the community without having to sample it directly. We are also interested in future development of the theory that provides predictions for the number of species at areas that are larger (rather than smaller) than the reference point which may have greater applicability to conservation work.

← How I remember the positive in science and academia: My Why File
UPDATED: Unifying Ecology across Scales: Mentoring Program [announcement] →